Buffy would have had to be my original pop culture hero. Through her I learnt to stand up for myself. That it was okay to be different, quirky and weird. She taught me to be vulnerable yet strong at the same time. She taught me equality and empathy. She taught me how to handle grief, break-ups and friendship issues with style and sass. She taught me that I have my own power as long as I believe in it and use it. Willow (Buffy’s best friend) taught me that nerds are awesome. It turns out I wasn’t the only one who felt this way. There are numerous blog posts online that demonstrate the influence the show had on girls at the time and the impact it is still having today. Google: What Buffy taught me and you’ll have a cavalcade of choices. Why has Buffy made such an impact to how girls see themselves?

Because it turns out that Joss Whedon, the creator of the character, is a feminist.

So what is feminism? It seems that a lot of girls are confused.

Feminism is defined as “advocating social, political, and all other rights of women equal to those of men.”

“FEMINISM IS:
1.)respecting people of all genders (recognizing the diversity in sexuality, from homosexuals, transgendered, heterosexuals and transexuals) as human beings that deserve to be treated with respect.

2.) recognizing the past inequalities that have historically denied women access to many social, economic and political spheres that are mostly occupied by men.

3.)Recognizing the result of these inequalities have lasting impacts today”

The strangest thing I have heard from the mouths of teenagers about feminism are the following:

“Aren’t they against stay-at-home mums?”

“They hate men don’t they?”

Kaley Cuoco-Sweeting from The Big Bang Theory was asked recently if she was a feminist. She replied with “Is it bad if I say no? It’s not really something I think about. Things are different now, and I know a lot of the work that paved the way for women happened before I was around… I was never that feminist girl demanding equality.”

This caused enormous media backlash at the time and Kaley had to refute her comments in her Instagram account. Advising that she is blessed and grateful that strong women have paved the way for her success and many others.

So I ask myself, why is feminism shown in a negative light and how can we use characters like Buffy to demonstrate gender equality?

Feminism is seen in a negative light by society for various reasons. One is fear. Another blogger named Michael Kaufman highlights why men may be afraid of feminism. He advises that the main reason men are afraid is because “it challenges forms of men’s power and privilege that one-half of our species foisted on the other about 8,000 years ago”. Jessica Valenti’s vlog on why people are afraid of feminism hits the nail on the head with this one with “people are afraid of what they don’t know”.

Jessica outline the rise of the anti-feminist movement on social media. However, when one looks into it a little deeper you realise that it is based on a skewed definition of feminism. What was once covered in photos like these…

… is now filled with other photographs correcting the previous posts on their incorrect portrayal of what feminism actually is.

In true Buffy and co style a number of people on social media decided to create their own movement and memes to counteract the anti-feminist movement with quirk, style, sass and delivering their own brand of power… 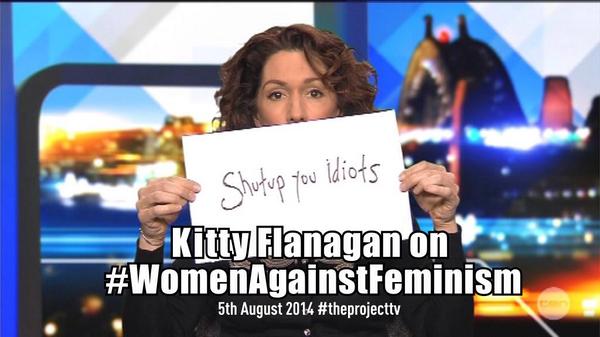 and who could forget the #ConfusedCatsAgainstFeminism?

Twitter was also set alight by those attempting to correct its misrepresentation.

And with a stroke of genius the UN pushed forward and chose Emma Watson (we all remember Hermoine don’t we?) as the face of feminism.

What’s more Buffy-esque than that?

Let’s dare to be Buffy and Co.

Let’s dare to be feminists!